Government Wants Elderly to Move out of Family Homes.

Once again, older people in Britain are being made to feel a burden on the nation. Elderly people have a hard enough time in the modern times.

There is now growing belief with in the government that private properties that belongs to the elderly should be now used as a solution to Britain chronic housing shortage. 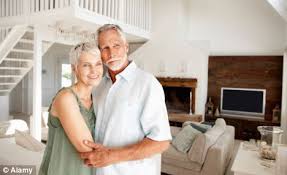 Research has shown that an estimated 25 million bedrooms in England are empty, this is believed to be largely due to elderly. Couples not moving out of large family homes.

At the same time many young families are increasingly being squeezed into small homes and overcrowded flats.

The scheme which is outlined by the housing minister Grant Shapps, proposes that local councils help the elderly home owner downsize to smaller properties and then rent out their homes to families on local housing waiting lists.

Under the proposals, local authorities would take the responsibility for maintaining and renting out the vacated properties at affordable prices, but below many private rented accommodation. For example a four bedroom house managed by the council could be rented out for approximately £1,300 per month.

Profit made on the property would be handed back to the owner. The government believes the proposal would provide extra support for the elderly owner without them having to sell their ‘beloved’ homes.

It is believed that lower council tax, utility bills and also the income from their former home could mean that elderly owners could potentially save them ore than £7,000 a year.

This proposal conjures up images of clipboard wielding officials invading peoples homes and deciding which properties should be ‘commandeered’.

The over 50’s group Saga described this proposal as ‘outrageous social engineering’ and added ‘any suggestion older generations were hoarding housing has come across as extremely offensive’.

The fact is that by the time that most people have reached their retirement they have worked very hard to pay off their mortgage.

Many elderly home owners want to down size, especially if they are finding stairs or maintenance bills difficult. However this should be their own choice and not one dictated to them by the government.

Neil Duncan-Jordan, of the National Pensioners Convention stated that “if you are in a three bedroom house and you actually want to downsize, the market is not exactly brimming with retirement accommodation”.

Michelle Mitchell, of Age UK stated that “no one of any age should feel they have to move out of their own home unless it is what they want to do”.

Many elderly people are already under pressure to downsize and pass on the money made from the sale of their large property to their children and grandchildren who are struggling with a large mortgage or even unable to get onto the property ladder themselves. It therefore seems that Shapp’s proposal may only add to the pressure.

Related stories to : Government Wants Elderly to Move out of Family Homes.